In my post yesterday about County Competitions, I got my days mixed up for the Lyon Foursomes at Hazlehead. This event takes place on MONDAY 02 and TUESDAY 03 August. I have corrected the post now.
Apologies for any confusion.
Lorna
Lorna M Johnson
Captain, ALCGA
Posted by Lorna Johnson at 17:36
Email ThisBlogThis!Share to TwitterShare to FacebookShare to Pinterest

The Deeside County Open takes place on Monday 26 July. The closing date is Monday 12 July so there is still time to post your entry – and there should be late entry availability too.
The Lyon Inter-Club Double Foursomes is the first event in August, on Monday 02 and Tuesday 03, being played on the Hazlehead Mackenzie Championship course and hosted by Hazlehead Golf Club. The closing date is Monday 19 July and no late entries will be accepted. If you haven’t acted to enter already, now is the time.
The Newmachar County Open is the second event in August, on Friday 06. There is still plenty time before the Friday 23 July closing date for you to send your entry.
The Commonwealth Spoons Qualifying Competition (2 ball foursomes) is the third event in August, on Monday 16. Please find a partner and enter now, well before the closing date of Monday 02 August. Don’t wait and risk disappointment if there is no late entry availability.
Looking forward to seeing you all at one or more of these County fixtures.
Lorna
Lorna M Johnson
Captain, ALCGA
Posted by Lorna Johnson at 21:28
Email ThisBlogThis!Share to TwitterShare to FacebookShare to Pinterest 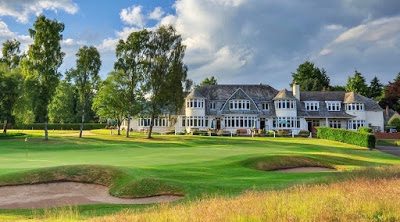 Three weeks ago this evening, I was getting ready to head off to Monifieth the next morning for the Jamboree, one of the highlights of our County golfing calendar. I cannot believe that it’s so long ago. However, reflection is a valuable process ...
The 2021 Jamboree took place on Monifieth Links from Saturday 12 till Monday 14 June 2021. The event started with a practice round on the Friday when Team Aberdeenshire arrived in great spirits, raring to get started. 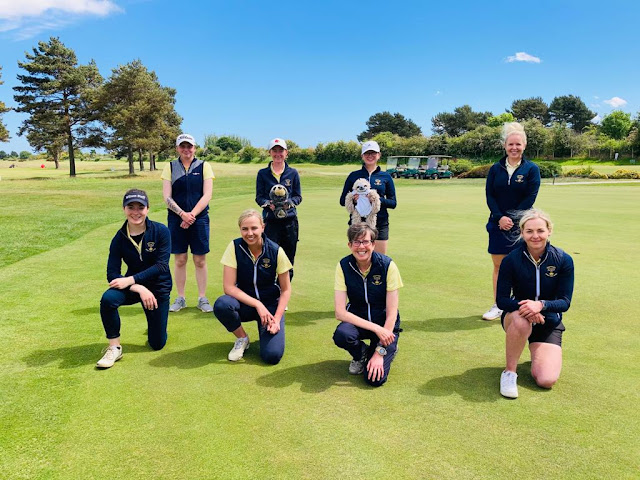 Back left to right: Jasmine Mackintosh, Carmen Griffiths (with her Sloth head cover),
Robyn Fowlie (with our Mascot Sloth), Sammy Fanthorpe
Front left to right: Karolina Martincova, Rachel Polson, Sheena Wood, Megan Robb
I’m sure you will have seen already on the website the daily and overall Jamboree results and the photographs. You will know that Aberdeenshire was runner-up to Perth & Kinross by a close margin. Nonetheless, Team Aberdeenshire was awesome and did ALCGA very proud. Here now is some of the story.
The Golf
Friday’s weather was fairly typical of all four days. It was WINDY, a gale at times. When the sun was shining – which it did quite frequently – it was reasonably warm. When the clouds came over – again frequently but with some stunning formations – it was very cold. Conditions were very tough.

Selector Zibby, Vice-captain Olive and I faced the taxing task of making decisions about who to play, which foursomes pairings, what order. It was hard because we had eight very strong players to choose from, all of whom more than deserved her place, most of whom had played in previous Jamborees – Sheena coming close to forty appearances - plus we had a couple of rookies in Karolina and Robyn. Carmen played in her third Jamboree and was awarded a County brooch. 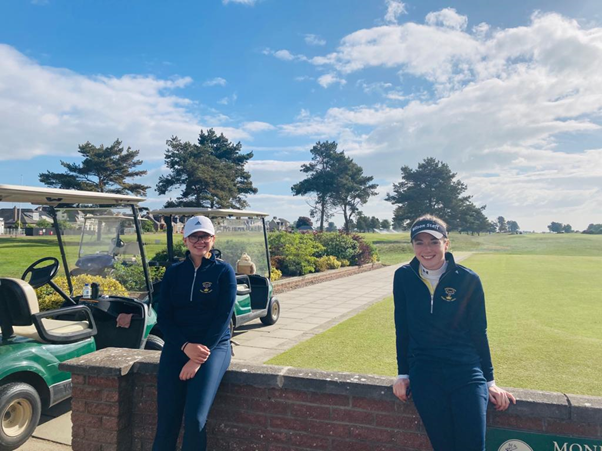 Saturday’s match against Perth & Kinross saw us all square after the morning foursomes. Jasmine and Carmen had a great 7&5 win. In the afternoon singles, we lost narrowly 2.5 - 3.5. Sheena had a great 6&5 win. In the end, it came down to the last game on the last hole of the course with Megan losing by only one hole – she was so disappointed after battling so hard. So close … but we finished 4-5 down to Perth & Kinross. 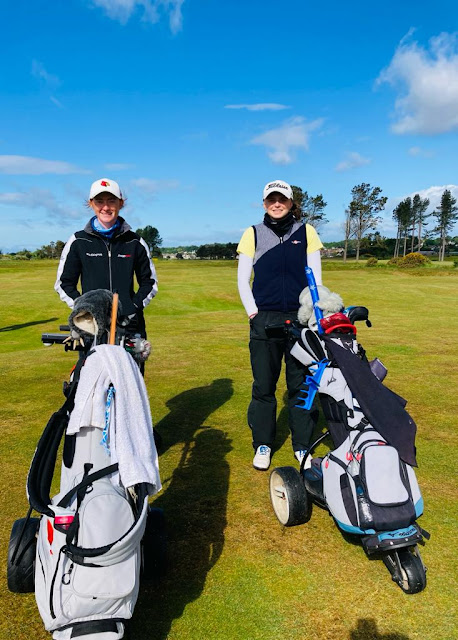 On Sunday, in our match against Angus, we were one down after the morning foursomes. Jasmine and Carmen had another great win, this time beating their opponents 6&5. Coming from behind, Team Aberdeenshire rose to the afternoon’s challenge and won five out of the six games. Megan had a stunning 8&6 win to compensate for her Saturday’s disappointment. Winning 6-3 was a very good outcome against Angus.
On Monday, against Northern Counties, we had everything to play for. Perth & Kinross already had 4 match points, so we had to win. We also had to have our fingers tightly crossed that Angus would conquer over Perth & Kinross to force a 3 way tie on 4 match points each and, therefore, a count of individual game points. Whatever else, we had to win as many games as we could by as much as possible! 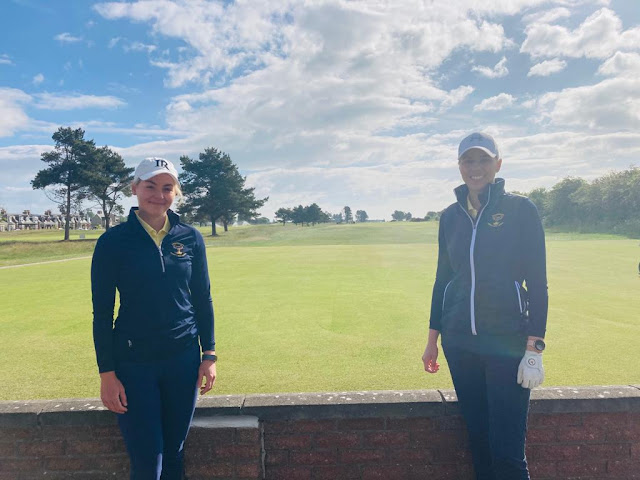 The morning went well and we were one game up after the foursomes. It was a 7&6 win today for Jasmine and Carmen. Sheena & Sammy dug their heels in kept their cool to win by 1 hole. Megan and Robyn fought hard and were really unlucky to go 1 hole down on the eighteenth when the opposition holed an unbelievably long putt to win the hole. Team Aberdeenshire girls gave their all in the afternoon singles and won 4 of the 6 games. Rachel triumphed 5&4. Robyn lost out very closely again on the eighteenth green after a fierce contest. A 6-3 win at the end of the day was a good score for us against Northern Counties. 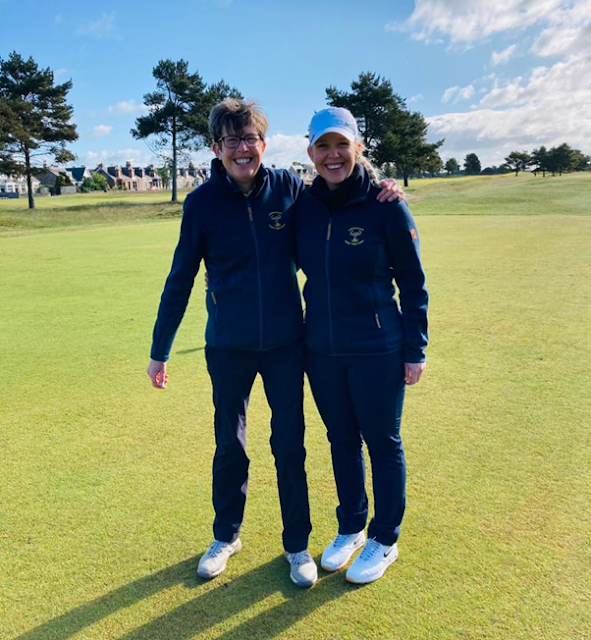 Angus did their best for us too. They pulled out all the stops against Perth & Kinross and drew on 4.5 games each. With two wins and a draw, giving them 5 match points, Perth & Kinross won the trophy. With two wins, giving us 4 match points, Aberdeenshire was hard on the Perth & Kinross heels as runner-up. Congratulations to Perth & Kinross who retained the trophy from 2019.
Thanks …
Many thanks must be put on record.
First of all, thanks to our Jamboree and Monifieth hosts and helpers. Thanks to:
Next, thanks to everyone behind the ALCGA endeavour. Thanks to:
Thanks would be incomplete without making the biggest thank you of all to our splendid players who put their hearts and souls into every aspect of the Jamboree – the golf, the rivalry, the friendship, the fun, the commitment, the mutual support - from the practice days at Meldrum House through their personal preparation to the matches at Monifieth. Very well done to each and every one of you. It was overwhelming to receive the team’s thank gift to me – very kind and very much appreciated. 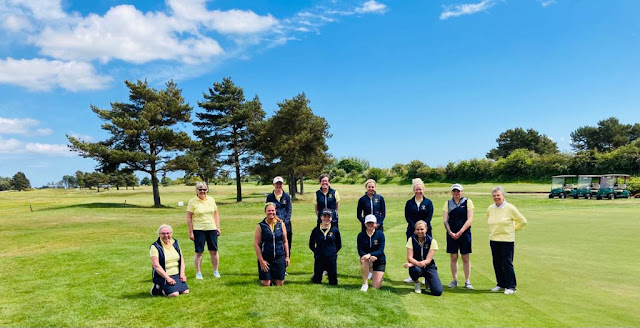 The players with Captain Lorna, Vice-captain Olive, Selector Zibby and President Ros
Final Comment …
Having missed out on our 2020 Jamboree because of the pandemic, it was such a pleasure to be part of this year’s competition. It was competitive, fun, tense, exciting, inspiring … and so many other things too. The standard of golf was amazing. We are very fortunate to have so many talented players in Aberdeenshire. The good natured spirit of camaraderie and competitiveness in which all games were played was a credit to all the Counties and their Captains.
Congratulations again to Perth & Kinross on their win. We wish them well when they head to Forres Golf Club at the end of August to represent the Northern Division in the Scottish County Finals. Very good luck … play well.
And, of course, congratulations to the 2021 Jamboree runners- up.
Lorna
Lorna M Johnson
Captain, ALCGA
Posted by Lorna Johnson at 00:33
Email ThisBlogThis!Share to TwitterShare to FacebookShare to Pinterest
Newer Posts Older Posts Home
Subscribe to: Posts (Atom)